Request for a last firmware update

Hi! I just got a new NVMe enclosure and since I was upgrading its firmware I decided to upgrade this one too.

I chose the one that has support for suspending the drive, as it is the default behaviour mine had and I’d like it to continue that way because the drive is connected continuously.

To test some things though, I plugged in a 2.5’’ Samsung EVO. It works as expected as well, even though the device is intended for bigger 3.5’’ drives. However I noticed something odd, hence the request for a newer firmware (if at all possible, I know these things aren’t cut and dried).

The thing is, when an SSD is connected to it, Windows doesn’t recognize it as an SSD. TRIM or unmap does seem to work, but Windows still thinks it’s a mechanical hard drive so it won’t issue those commands on a regular basis.

I have another adapter, not enclosure, from a different vendor, that also employs the ASM1153e bridge/chipset. As opposed to the USB3-SATA-UASP1, SSDs are correctly detected over there.

The way it can be seen is for example in the “Defragment and Optimize Drives” program that comes with Windows (I’m running 2004, in case you want to replicate it over there). This is how it reads when using the USB3-SATA-UASP1: 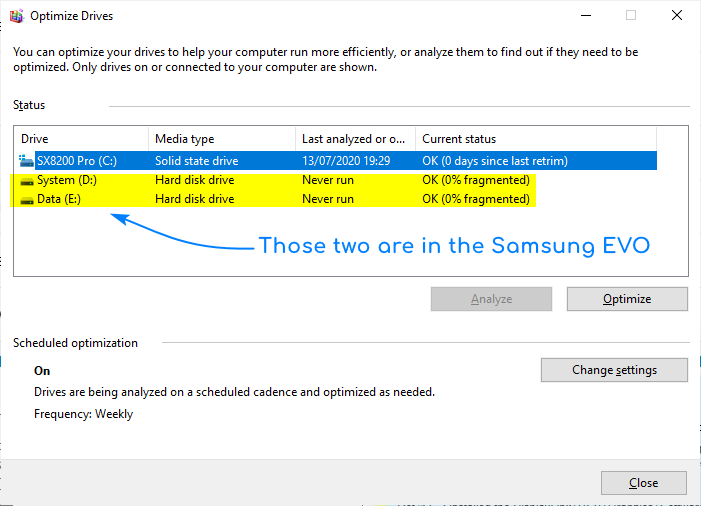 It even allows it to be “analyzed” for fragmentation.

If necessary I can state the name and model of the other adapter (maybe via PM?) I hesitate because I don’t like drawing comparisons between companies and I’m fond of Plugable.

In any case, thank you for your time and for considering the petition, whether it ends up materializing or not.

Thanks for reaching out to us, I am sorry this is not behaving as expected with the Samsung EVO SSD.

I was able to duplicate the results you are seeing and verified that TRIM shows as enabled but is fails and is non-functional using the USB3-SATA-UASP1 with Windows 10 x64 v2004.

Unfortunately this hard drive dock has been discontinued since late 2016/early 2017 and we are longer eligible for firmware updates from the manufacturer. Windows disk Optimization can be manually disabled for the drive by selecting the Change settings button.

The lay flat docking station was replaced with our vertical dock ( https://plugable.com/products/usbc-sata-v ). I have verified Windows does correctly detect a Samsung 840 EVO 250GB SATA SSD as a Solid state disk in the Optimization utility and also verified Trim is supported and functions correctly with this updated vertical SATA dock.

I am sorry, this earlier dock will not be receiving firmware updates to enable SSD features.

Please let me know if you have any additional questions, or would like assistance disabling optimization on the drive and I will be happy to provide any additional details I can.

Thank you for the reply Pat, I’m not affected too much because I use it for a 3.5’’ mechanical hard drive, and to be honest I don’t even know who would use it for SSDs, but since I gave it a go I decided to let you guys know in case it was possible.

Thank you anyway and kind regards! You’re definitely my go-to brand for these kinds of things precisely for the support you bring to the table. It doesn’t matter that it is an old model like this one, you explore the possibility of the request and report back.

I don’t even know of other brands that do it (but I have very little experience in this).

I am going to go ahead and close this thread, please feel free to startup a new thread, or send us a direct email (support@plugable.com ) if you have any additional questions.